Ezarri has triumphed in one of its most remarkable challenges with this mosaic tile pool. It involved creating a mosaic for an exclusive, very complex design which also had an important artistic component. The result is a hypnotic mosaic tile pool that captures the attention of anyone who sees it. It is a swimming pool built in an art gallery situated in the open air in the French Provence.

The location is the Contemporary Sculpture Park Domaine du Muy, belonging to the French collector Jean-Gabriel Mitterrand, a collector who for three decades has given pride of place to sculpture in his gallery in the Marais neighbourhood in Paris. He has also done so in numerous exhibitions in public and private spaces throughout the world.

In 2014, Jean-Gabriel Mitterrand dreamed of creating a private venue dedicated to monumental sculpture in the South of France. The result is a magical park full of sculptures. They are works that combine with the landscape of the French countryside of Provence, in a very special place not far from tourist attractions such as Saint-Tropez and Monaco.

Ezarri has worked with the designer of this hypnotic pool, the artist Peter Kogler.

The specialist publications note that "for more than thirty years, the Austrian artist Peter Kogler has worked at the intersection of architecture and new media to build immersive environments and sculptural elements that seem to redefine physical spaces. By filling the walls with optical illusions, he challenges the sensation of depth (and sanity) of the spectator. With his ambitious monochromatic installations based on repetitive patterns that incorporate pipes, ants and bold snake-like patterns". 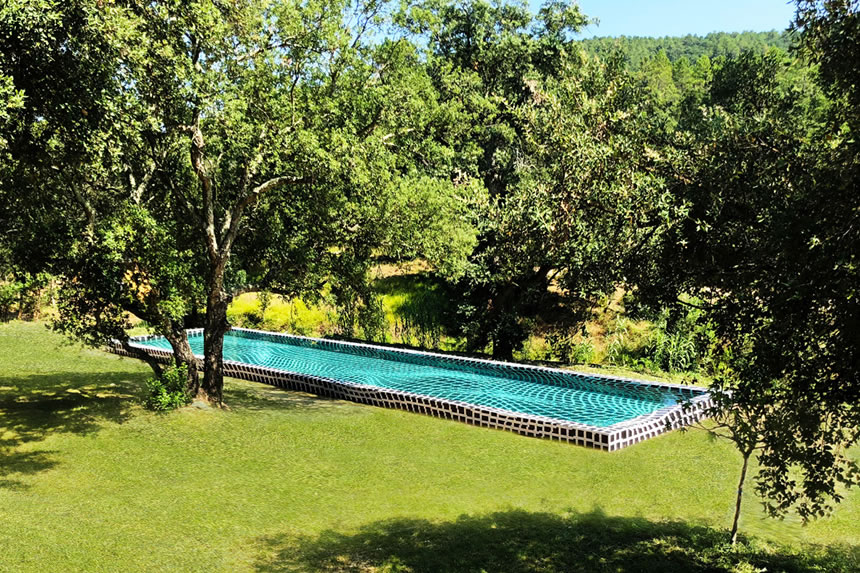 Ezarri prepared to take on the artist´s extraordinary project incorporating all these artistic elements. To begin with, the original idea was conceived by the artist. Later, it was given shape by Ezarri in the form of mosaic. To adapt the Kogler concept to the mosaic of this mosaic tile pool, a three-dimensional model was created by Ezarri.

The result is eye-catching. The resulting mosaic tile pool is a beautiful monochromatic delirium which presents no precise borders to our senses. It is a work that bears the personal imprint of this artist. The project has brought out the best in the company, enabling Ezarri to rise to the challenge of creating such a complex mosaic tile pool.

With this work, Ezarri is now part of the French countryside of Provence thanks to a spectacular mosaic tile pool. The result of the project has been placed within a collection of works of art in the field of contemporary sculpture.

Mosaic tiles are a type of cladding that is frequently used for pools. But what are the reasons behind this beautiful material being used so often?
Read the complete news item
Private Swimming Pools

We at Ezarri are launching an initiative that needs your help to select the best mosaic tile pools. That is why we have created a photo gallery page of pools that we have finished around the world.
Read the complete news item
Do you want to keep informed of Ezarri news?Subscribe to our newsletter
done