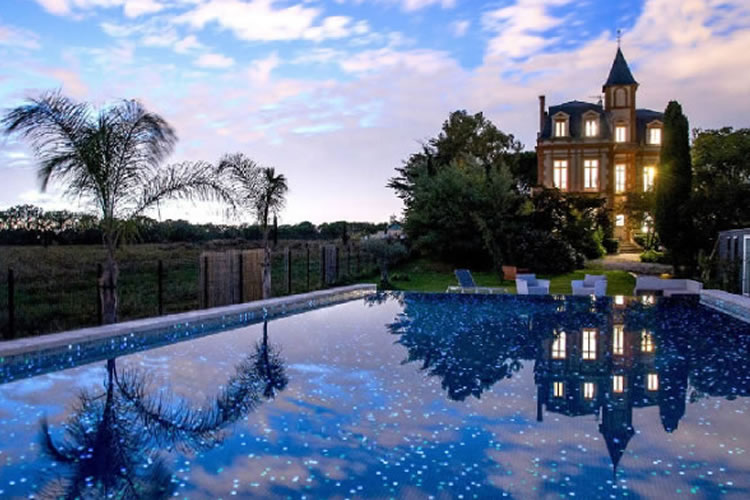 Swimming pools have a special attraction at night, being perhaps even more seductive. If you add a private chateau on the French Mediterranean coast, on the famous Côte d´Azur, the result is both surprising and suggestive, especially if phosphorescent glass mosaic tile is used.

In fact, adding an Ezarri phosphorescent mosaic is the special touch that makes all the difference. This, combined with lighting – a fundamental aspect of exclusive pool design – leads to an outstanding result, due to the power of the phosphorescent glass mosaic tile. It has a beauty that is hard to beat.

This was the thinking behind the decision of the members of the jury of the 13th National Pool and Spa Design Competition which took place in the French city of Bordeaux on 19 March.

The competition brought together three hundred competitors. And the best pool and spa designs that were presented, from all over France, were rated and the winners selected. It is a trophy in which the phosphorescent glass mosaic tile has made a difference.

The outstanding individual success of this French competition was the Todedano family, who won three prizes (two gold and one silver). One of the gold awards was in the category "Nocturnal pool". And this was where Ezarri contributed in a decisive way with its phosphorescent glass mosaic tile.

A swimming pool that shines in the dark

The material used to win this gold award was the Ezarri style reference Serpens from the Fosfo (phosphorescent) collection. It is a phosphorescent glass mosaic tile with mixtures where 4% of the mosaics are phosphorescent that charge up with light and later emit light in the dark. The effect achieved is that of surprise when you see the mosaics in the dark.

It is also worth highlighting the style references used in the mixture. They are

The result is a nocturnal pool with suggestive lighting with a phosphorescent glass mosaic tile that glows in the water in the dark of night. With Ezarri, it becomes a prize-winning pool.

Mosaic tiles are a type of cladding that is frequently used for pools. But what are the reasons behind this beautiful material being used so often?
Read the complete news item
Private Swimming Pools

We at Ezarri are launching an initiative that needs your help to select the best mosaic tile pools. That is why we have created a photo gallery page of pools that we have finished around the world.
Read the complete news item
Do you want to keep informed of Ezarri news?Subscribe to our newsletter
done